Posted by carla Andrews on Saturday, February 20, 2016 Under: Wellbeing
Now if you have read my previous 'Sugar Free Transformation', or 'Mind, Mouth, Muscle' blog series you would know that in Jan 2015 I embarked on transforming my life physically. The first thing I did for myself was join Parkrun - a international Saturday morning timed 5k event held in my local park. I had stumbled on it months before and had met the lovely organiser Tracey Bliss. She assured me that the lack of my ability to run (or even barely walk) was not a problem. That Parkrun was in local communities for all abilities, regardless of age.

With my bar-code in tow - I set off at 9am with the tail-runner and began my first 5k. I was ashamed and wanted to give up, especially as my calf's were so stiff. If I had been on my own I would have stopped, but I was so embarrassed I kept on going with my head down and tears in my eyes. Two thirds of the way through I started to feel better as I was getting there one foot in front of the other, and with a small army of people cheering me on (I actually learned that day that the tightness in your muscles eases up after awhile after your muscles warm up). I felt bad for all those people though as they were being held up by me, as I was much slower than everyone else. This added to my embarrassment and I hated myself for it even more. My time was 77 minutes.

I didn't give up, I went back the next week, head down and walked round the course with the tail-runner and some other in tow. All of them offered kind words of support and we talked and walked the 3 miles away. As I went through the finish-line I was pleased with myself, but still had that self-hating mode that I was holding all the volunteers up.

Now, with Parkrun you scan your bar-code when you have finished and they email you your finish time. In my second week I had shaved off time from the previous week - and that was an amazing feeling.

As the weeks went on, I kept receiving support from this fantastic network, people of all ages and abilities all supporting me on my journey. My weight was changing drastically, and I was feeling good. My dear friend Trevor Rawson would pace me and encourage me all the way round, and I remember his most memorable piece of advise was look where you are going "head up". He knew I was embarrassed, but he and everyone else made me feel like part of a family. Each week, this family helped me lower my times by August 2015 I was around the 37 minute mark and able to slow run the whole distance. Where as initially I knocked minutes off week on week, I was now down to seconds but it was all going in the right direction. I had it in the bag! So much so I started running on my own.

In November I took a 12 week contract that would mean that I would miss my Parkrun - but that was okay - it's just 12 weeks. Looking back now it was the worst mistake for my personal health and wellbeing. Parkrun gave me my own competition week on week, motivated me, made Saturday 'my day' and most off all gave me people that became my friends. I'm glad to say my contract is up now, and I have just completed my first Parkrun of 2016 (although again at a walking pace). God, it hurt for the first 2/3 of the way round, stiff muscles but I held my head high knowing - that week after week it will come back to me.

As an added bonus Dame Kelly Holmes also joined Basildon 100th Parkrun and I got my photo taken with her and my friend, and Basildon Parkrun organiser Tracy Bliss. 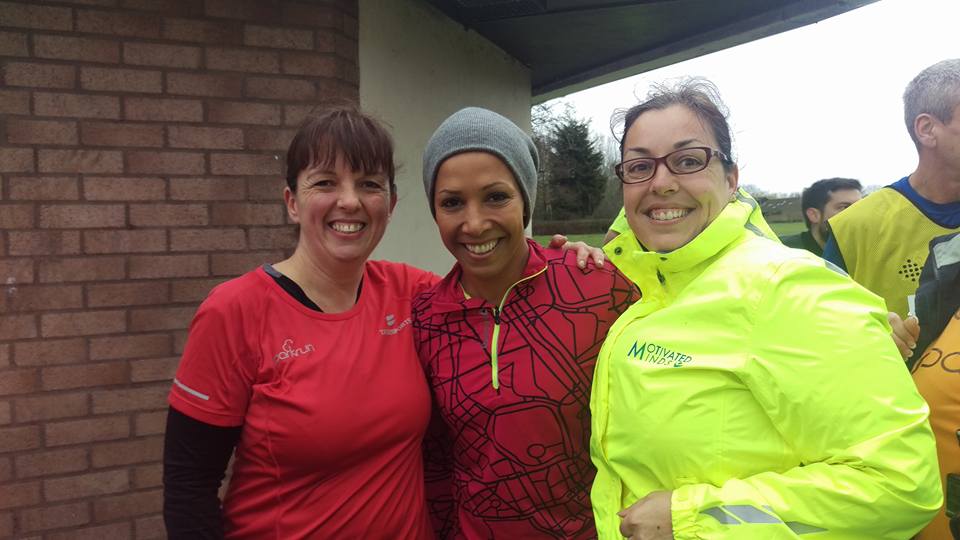 This free event, is a backbone to so many people like me, yes there are the super fit, but then there are just as many, if not more just like me - who struggle with exercise, weight, and creeping old age. Parkrun gives so much and I would like to say a personal big thank you to all those that have supported me, as well as encourage anyone wanting to improve their health and wellbeing to find your local one (http://www.parkrun.org.uk) and go.